Why Sunnis Do Not Comemmorate Ashura (Matam-3) 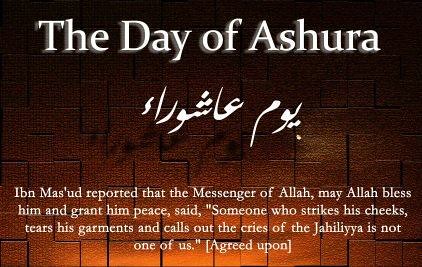 “ Why do the Sunnis not comemmorate the death of Hussain (رضّى الله عنه), the Prophet’s grandson?

“Neither the Prophet (peace and blessings of Allaah be upon him) nor his rightly-guided successors (the khulafa’ al-raashidoon) did any of these things on the day of ‘Aashooraa’, they neither made it a day of mourning nor a day of celebration.
all of this is reprehensible bid’ah and is wrong. None of it has anything to do with the Sunnah of the Messenger of Allaah (peace and blessings of Allaah be upon him) or the way of the Khulafa’ al-Raashidoon. It was not approved of by any of the imaams of the Muslims, not Maalik, not al-Thawri, not al-Layth ibn Sa’d, not Abu Haneefah, not al-Oozaa’i, not al-Shaafa’i, not Ahmad ibn Hanbal, not Ishaaq ibn Raahwayh, not any of the imaams and scholars of the Muslims.
The religion of Islam is based on two principles: that we should worship nothing besides Allaah Alone, and that we should worship Him in the manner that He has prescribed, not by means of bid’ah or reprehensible innovations.

The Shia mourning on Ashura is therefore a spiteful fist in the air against the Sunni majority. The Shia leave no stone unturned in their defamation of the Ahlus Sunnah, and thus they want everyone to remember that it was “Yezid the big bad Sunni” who was responsible.

Sometimes the Shia of today will encourage the Sunnis to comemmorate Ashura, using and exploiting the fact that the Ahlus Sunnah also loves Hussain (رضّى الله عنه). We strongly urge our Muslim brothers not to fall into this trap of the Shia! They want us to take part in rituals that were designed to defame the Ahlus Sunnah, and nothing more. We cannot accept the Shia way of life.
Additionally, comemmorating Ashura with any special ritual would be adding to the faith of Islam, and this is Bidah. Bidah is considered part of Hell-Fire, and whoever invents a Bidah is promised Hell-Fire as well.

“[It is a] delusion that such innovation [commemorating Ashura] is a pious deed…Nor has such commemoration been Sunni practice at all - even for the death of the Holy Prophet, whose passing from this world is a much greater loss - whether on Ashura or any other time of the year…
As for love of Ahl al-Bayt it is an integral of Sunni belief but in a Sunni way, not a sectarian way chock-full with ill feelings fanned by fabrications. Ibn Kathir said in al-Bidaya wal-Nihaya (8:201-202):
Al-Tabarani mentioned in this chapter very strange reports indeed and the Shi`a went overboard concerning the day of Ashura, forging many hadiths that are gross lies such as the sun being eclipsed on that day until the stars appeared, no stone was lifted except blood was seen under it, the celestial region became red, the sun and its rays seemed like blood, the sky seemed like a blood clot, the stars were hurling against one another, the sky rained red blood, there was never redness in the sky before that day, and the like… among other lies and forgeries of which not one report is sound.”
Success is from Allah, may He keep us on the path of His Prophet and his Companions, away from sectarianism and bad adab posing as love of Ahl al-Bayt.

From a logical standpoint too, we wonder if the Shia expect us to comemmorate the death of all the great heroes in Islam? If this were the case, then there would not be a single day left in the year in which the Muslims could be happy! Surely, in the great long history of Islam, there has been a martyrdom on every day of the year.

And what about Prophet Isa (عليه السلام)? Should we also celebrate Christmas and Easter like the Christians do to celebrate the birth and death of Isa (عليه السلام)? Would it not be a great Bidah to take part in these Christian comemmorations?
Can the Shia provide even one difference between these Christian holidays and the Shia holidays? Why do the Shia find it permissible to celebrate the Prophet Muhammad’s birthday (صلّى الله عليه وآله وسلّم) and comemmorate Hussain’s death (رضّى الله عنه), but then they would look down on a Shia who took part in Christmas and Easter? If the Shia say that the Sunnis do not love the Prophet’s grandson because they do not comemmorate Ashura, based on this logic can’t we also infer that the Shia do not love Prophet Isa (عليه السلام) since they fail to comemmorate his birth and death? Surely this is faulty logic.

In regards to the actual rituals of the Shia, these are barbaric practises of self-flagellation, violence, and paganism. How can the Shia actually ask us to partake in such displays? We shall do no such thing and rather we shall distance ourselves from them. Instead, we shall continue to call our Shia brothers to the path of true Islam of the Ahlus Sunnah, as followed by Hussain (رضّى الله عنه) himself.

We will not exploit the death of the Prophet’s grandson for sectarian agenda, as the Shia have done. And the truth of the matter, as we shall see in future articles, is that the death of Hussain (رضّى الله عنه) was the fault of the Shia of Kufa.

What the Shi’ah do on ‘Ashoora’ of beating their chests, slapping their cheeks, striking their shoulders with chains and cutting their heads with swords to let the blood flow are all innovations that have no basis in Islam. These things are evils that were forbidden by the Prophet (peace and blessings of Allaah be upon him), who did not prescribe for his ummah to do any of these things or anything similar to them to mark the death of a leader or the loss of a martyr, no matter what his status. During his lifetime (peace and blessings of Allaah be upon him) a number of senior Sahaabah were martyred and he mourned their loss, such as Hamzah ibn ‘Abd al-Muttalib, Zayd ibn Haarithah, Ja’far ibn Abi Taalib and ‘Abd-Allaah ibn Rawaahah, but he did not do any of the things that these people do. If it was good, he (peace and blessings of Allaah be upon him) would have done it before us.

Ya’qoob (peace be upon him) did not strike his chest or scratch his face, or shed blood or take the day of the loss of Yoosuf as a festival or day of mourning. Rather he remembered his missing loved one and felt sad and distressed because of that. This is something no one can be blamed for. What is forbidden is these actions that have been inherited from the Jaahiliyyah, and which Islam forbids.

Al-Bukhaari (1294) and Muslim (103) narrated that ‘Abd-Allaah ibn Mas’ood (may Allaah be pleased with him) said: The Prophet (peace and blessings of Allaah be upon him) said: “He is not one of us who strikes his cheeks, rends his garment, or cries with the cry of the Jaahiliyyah.”

And he said (8/220): The Raafidis went to extremes in the state of Bani Buwayh in the year 400 and thereabouts. The drums were beaten in Baghdad and other cities on the day of ‘Ashoora’, and sand and straw was strewn in the streets and marketplaces, and sackcloth was hung on the shops, and the people expressed grief and wept. Many of them did not drink water that night, in sympathy with al-Husayn, because he was killed when he was thirsty. Then the women went out barefaced, wailing and slapping their faces and chests, walking barefoot in the marketplaces, and other reprehensible innovations… What they intended by these and similar actions is to impugn the state of Banu Umayyah (the Umayyads), because he was killed during their era.

On the day of ‘Ashoora, the Naasibis of Syria do the opposite of what the Raafidis and Shi’ah do. They used to cook grains on the day of ‘Ashoora and do ghusl and perfume themselves, and wear their finest garments, and they took that day as an Eid for which they made all kinds of food, and expressed happiness and joy, intending thereby to annoy the Raafidis and be different from them.

Celebrating that day is an innovation (bid’ah), and making it an anniversary for mourning is also an innovation. Hence Shaykh al-Islam Ibn Taymiyah (may Allaah have mercy on him) said:

Because of the killing of al-Husayn (may Allaah be pleased with him), shaytaan caused the people to introduce two innovations: the innovation of mourning and wailing on the day of ‘Ashoora’, by slapping the cheeks, weeping, and reciting eulogies. … and the innovation of rejoicing and celebrating. … So some introduced mourning and others introduced celebration, so they regarded the day of ‘Ashoora’ as a day for wearing kohl, doing ghusl, spending on the family and making special foods. … And every innovation is a going astray. None of the four imams of the Muslims or any other (scholars) regarded either of these things as mustahabb. End quote from Minhaaj al-Sunnah (4/554).

It should be noted that these reprehensible actions are encouraged by the enemies of Islam, so that they can achieve their evil aims of distorting the image of Islam and its followers. Concerning this Moosa al-Musawi said in his book al-Shi’ah wa’l-Tas-heeh:

But there can be no doubt that striking heads with swords and cutting the head in mourning for al-Husayn on the tenth day of Muharram reached Iran and Iraq and India during the British occupation of those lands. The British are the ones who exploited the ignorance and naiveté of the Shi’ah and their deep love for Imam al-Husayn, and taught them to strike their heads with swords. Until recently the British embassies in Tehran and Baghdad sponsored the Husayni parades in which this ugly spectacle appears in the streets and alleyways. The aim of the British imperialist policy of developing this ugly spectacle and exploiting it in the worst manner was to give an acceptable justification to the British people and the free press that opposed British colonialism in India and other Muslim countries, and to show the peoples of these countries as savages who needed someone to save them from their ignorance and savagery. Images of the parades that marched in the streets on the day of ‘Ashoora’, in which thousands of people were striking their backs with chains and making them bleed, and striking their heads with daggers and swords, appeared in British and European newspapers, and the politicians justified their colonization of these countries on the basis of a humane duty to colonize the lands of these people whose culture was like that so as to lead these peoples towards civility and progress. It was said that when Yaseen al-Haashimi, the Iraqi Prime Minister at the time of the British occupation of Iraq, visited London to negotiate with the British for an end to the Mandate, the British said to him: We are in Iraq to help the Iraqi people to make progress and attain happiness, and bring them out of savagery. This angered Yaseen al-Haashimi and he angrily walked out of the room where the negotiations were being held, but the British apologized politely and asked him with all respect to watch a documentary about Iraq, which turned out to be a film about the Husayni marches in the streets of al-Najaf, Karbala’ and al-Kaazimiyyah, showing horrific and off-putting images of people striking themselves with daggers and chains. It is as if the British wanted to tell him: Would an educated people with even a little civility do such things to themselves?! End quote. ... And Allaah knows best.
https://islamqa.info/en/101268