Because the faith of Islam is perfect, it does not allow for any innovations to the religion. However, the Shia have added many innovations to the faith, and this is why they are called Ahlel Bidah (the People of Bidah). One such Bidah (innovation) is the practise of Matam, in which the Shia beat themselves in Muharram on the day of Ashura. The Shia will slap their chests, beat their backs, and involve themselves in other practises in order to “commemorate” the dead. 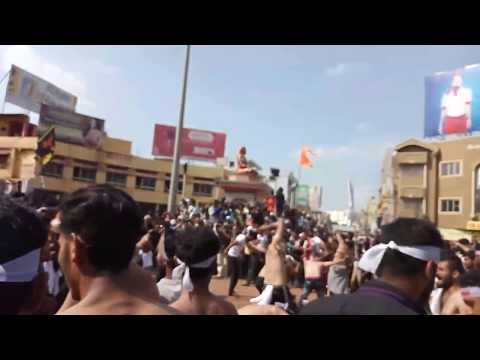 .
As for the Ahlus Sunnah, they are saddened by the wrongful death of Hussain (رضّى الله عنه). He is one of the many great heroes of Islam that died in the Name of Allah. However, the Ahlus Sunnah does not engage in self-flagellation or self-mutilation, which are both considered strictly Haram (forbidden). The Prophet (صلّى الله عليه وآله وسلّم) forbade barbaric practises like such, and he said: “No harm may be inflicted on oneself.”
Do the Shia really think that Hussain (رضّى الله عنه) would appreciate people engaging in self-flagellation and self-mutilation? If Hussain (رضّى الله عنه) were alive today, he would think that these people have lost their minds. We ask the reader if he would want his family to commemorate his own death in such a manner? No sane person would want his death commemorated in such a manner, no matter how unfair or how violent his own death was. So why do the Shia assume that Hussain (رضّى الله عنه) would want his death to be remembered in such a barbaric way? 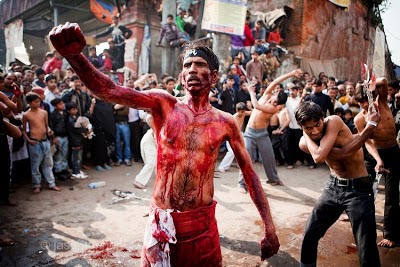 To bring up a more relevant example, let us assume for the moment that a boy likes a certain girl. In order to impress her, he decides to beat himself up for her to show his undying love for her. Do we think that she would actually be impressed with a boy who beats himself up? Surely not! Rather, the girl would be frightened out of her wits and she would likely call the police to control this boy. Indeed, only mentally insane people beat themselves up. It is a recognized psychological disorder, and there is much medical literature on this topic.
We can find no sane person on this earth who would want people to beat themselves up. It is completely abnormal and barbaric to beat oneself up even if to mourn the loss of a close one. This was a practise of the Jahiliyyah Arabs and the Prophet (صلّى الله عليه وآله وسلّم) forbade it, as well as the Quran. Allah Almighty condemns the pagans for the barbaric way in which they would worship:

“Their [pagan] prayer at the House (of Allah) was nothing but whistling and clapping of hands; therefore taste the punishment because you used to disbelieve!” (Quran, 8:35)

The Quran looks down on these barbaric and native ways of prayer which make the Muslim look like a wild tribesman and nothing more. In any case, there are better avenues of channeling grief, including reading Quran and being a good Muslim. What better way to commemorate the loss of Hussain (رضّى الله عنه) than by trying to rid the world of evil and barbarity? A person could donate money to the poor, create a trust fund in the name of the deceased, etc etc….the options for channeling grief are almost infinite, so why beat oneself up? What does it accomplish? We can only wonder why the Shia follow a faith that advocates such barbarity.
.
Article Written By: Ibn al-Hashimi, www.ahlelbayt.com

« Return to the main Articles page or the Matam subsection.